I thought, to wrap this up a little more finally, that I probably ought to post a few more pictures... so here they are. Pardon the lack of focus - I didn't have a camera and therefore the only pictures I have are borrowed from a friend. 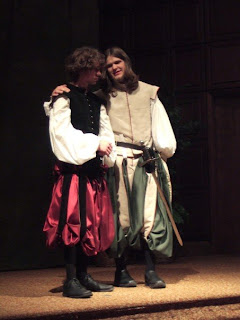 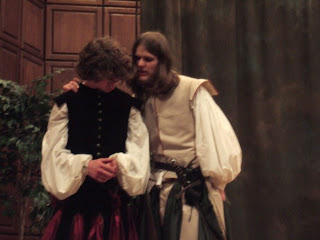 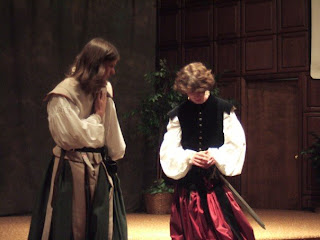 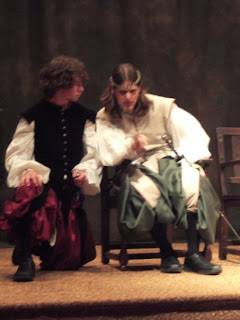 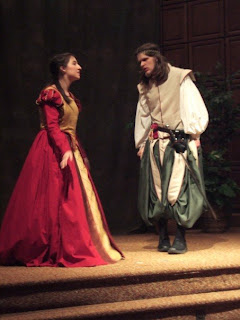 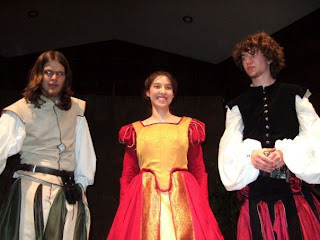 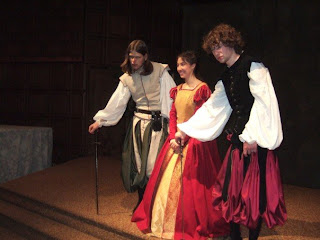 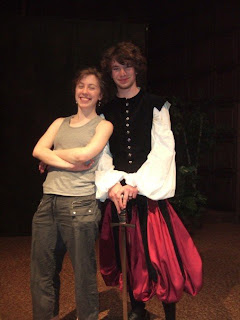 Posted by Abigael at 9:51 AM No comments: 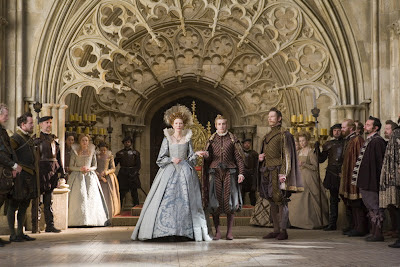 So... I found a picture online (costumersguide.com, fabulous movie costume research site) of men in pluderhose - from Elizabeth: The Golden Age!!! I was so excited that I simply had to post! Unfortuately, I haven't a clue who the men wearing them are, not having seen the movie... The suits are very similar to the ones I made, though. 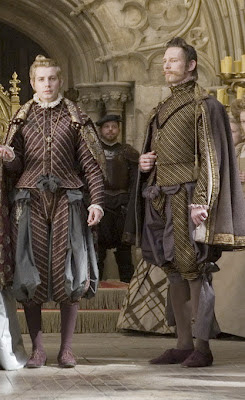 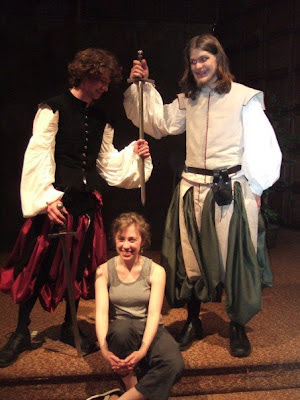 This is one photo from after the play. The costumes are just pinned together, and don't look exactly the way they will when they're finished. Tom's (on the left) looks pretty close to what it will, finished, but Justin's will look a bit more different. They're so silly and adorable... And I'm in the middle with my hair sticking out, looking like I was properly frazzled (which I was, but by that time I was fine, as you can tell by my huge tired grin).
Posted by Abigael at 8:51 PM No comments: 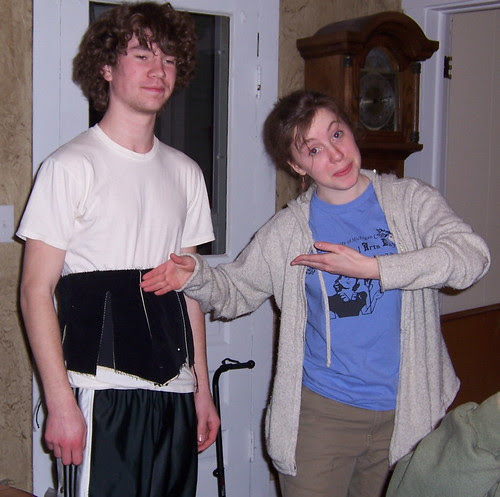 The play is finished. Yeah... and the pluderhose aren't. The boys did wear them though - both pluderhosen were stapled and safety-pinned together. ~hides face in shame~ No, you couldn't tell that they weren't finished (well, I definitely could, but nobody else knew), and their pants didn't fall off (I was mortally afraid that Justin's would just fall to pieces during his fight scene!). 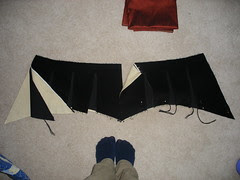 So I'm going to just keep blogging my progress, as I actually sew the pluderhose together properly! On the left is a picture of the Erik Sture pluderhose 'waist'. It's attached at the front (you can see the fly folded back). On the right side of the waist, I pinned up the panes so that they would sort of pouch out, like the finished product. On the left side you can sort of see that the panes are about a half inch longer than the base. You can also see all the different layers of fabric - the linen lining, black canvas base, and the linen lining to the top layer. Make sense? It took forever for me to figure out exactly how to do that!!

About a week ago I went to the Bloomfield's to help Tom's mother sew a dress, and while I was there I pinned the pluderhose waist onto Tom to get an idea of what it would look like. It's a good thing I did this, because it turned out that Tom wasn't fat enough (I alternate between calling him too skinny or too fat - he's really just a thin plaid line when he turns sidways) for the waist as it was, and I had to fix that! Of course, when I was there I could hardly run away home again before stuffing something under the panes to see what the waist poufs would look like. The waist poufs are the best part of these pluderhosen, dontcha know. I had brought along some long strips of the taffeta we picked for this costume, and I just threaded those through. I ended up doing this for the play, too, and pinning Tom in the process, but he forgave me (it's perfectly dreadful when you're frantically pinning somebody into their costume as the play starts and they do this sort of jump-an-yelp thing, and you know that you've stabbed them) and all's well...

The pink fabric hanging down the back of his leg is the extra from the waist poufs - my strip of fabric was too long so I just knotted it and let it hang.

Posted by Abigael at 1:56 PM No comments:

'Finished' Is a Relative Term 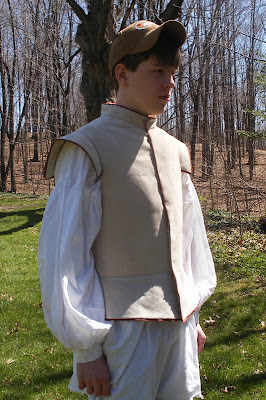 Well, it really is finished, only except for the buttons! This is Justin's doublet, fake microsuede and red silk trimming. I managed to get little (actually, not little, just younger) brother to put on the shirt and doublet for some photos. He insists that the big white shirt is like a maternity gown, and wasn't very enthusiastic about being pinned into the doublet, but he very kindly allowed me to do it in order to take my pictures (gotta love the baseball cap). Marc is a bit smaller than Justin, so it doesn't fit perfectly, but oh well. Close enough for a few photos! 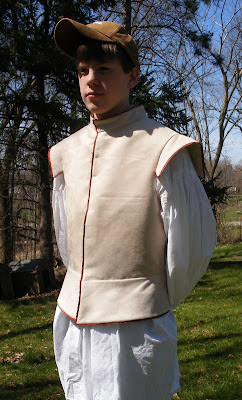 The only thing I'm that bugs me about it is that the waist seams at center front don't match, because the waist slants down a little. Hmm... 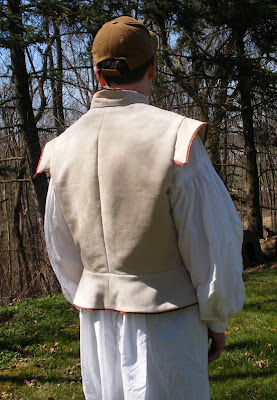 Posted by Abigael at 8:54 AM No comments: 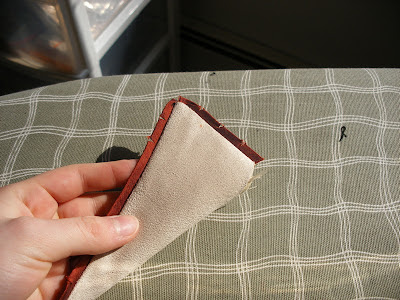 So, I haven't posted in a while (shame, shame), but I have worked on the costumes. I have most of Justin's doublet together, and that's the one I'm trimming in silk. The edging is just a bias strip of silk, notched wherever I feel like notching it (something like a half inch apart).

For Justin's doublet, I'm using a microsuede from Home Dec. It's working marvelously, although it's pretty stiff. Because it's so heavy, I'm not interlining it. So far, it hasn't melted from the iron once, and it makes a nice crisp edge too. The part of the costume in these pictures is a shoulder wing, lined with linen. Posted by Abigael at 2:01 PM No comments: 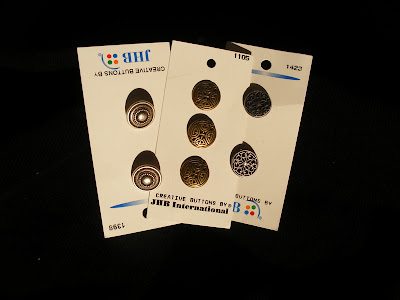 Which to use? These are all buttons that I thought looked good (of course, one has to be upside-down, what else?), although I think I'm leaning toward the left- or right-hand buttons. These are for the black corduroy Erik Sture doublet. What do you think? 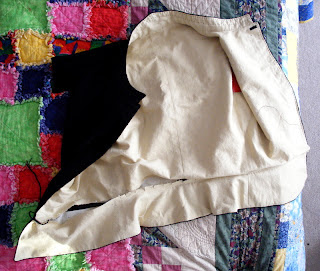 I've finally gotten the doublet skirt attached!! To reduce bulk in the waist seam, I stiched the outer layers (corduroy and interlining) into one seam, pressing the seam allowance down. Then I hand-tacked the linen lining of the skirt, handsewing the body lining down after, with the seam allowance facing up. Below is a picture (see the rainbow? It's real, I promise). 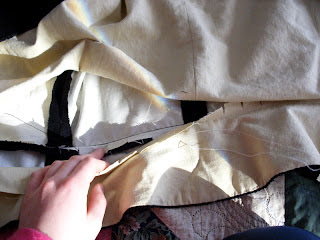 And now, more pictures (because I love pictures) of the doublet, now with the skirt attached! In the picture of the side you can see a big ripple in the back of the doublet - this is because Tom's waist is long, and Matilda's is short. It actually is a bit short on Tom... Hah, and Matilda looks like she's falling over! 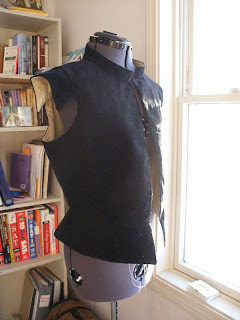 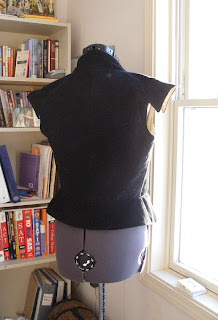 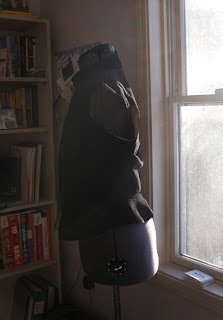 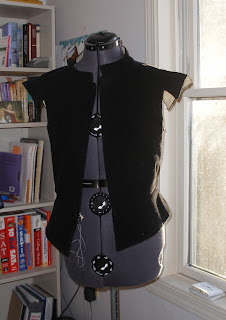 Posted by Abigael at 2:12 PM No comments: